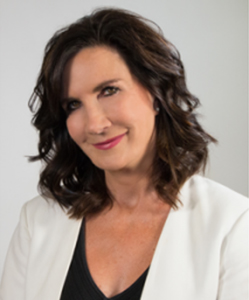 A recognized leader in both business and charitable organizations, Colleen West has been named the 2019 Honoree for the annual Rollstone Gala to be held May 15 at Timber Point Country Club in Great River, NY.

Many will recognize Colleen as a visionary businesswoman. After founding Enright Court Reporting, Inc. in 1991, Colleen expanded the business in 1998 to include a web-based transcription service that provides services to a broad range of professions; including legal, medical practices, hospital networks and insurance carriers.

Colleen dedicates her life to lifting up others, especially those in need, and her efficacy in raising funds for and providing leadership to various charitable organizations is widely recognized. A long-time member of the Rollstone Board of Directors, Colleen was named its President in 2018.

“Colleen’s caring and generous heart is evident to anyone who knows her,” says Michael Dawidziak, co-founder of The Rollstone Foundation. “This, combined with being a self-made successful businesswoman and a recognized leader in the world of philanthropy make her uniquely qualified to serve as President of the Board of the Rollstone Foundation.”

“Since its founding in 2008 and even before she was a board member, no one has been more generous to the Rollstone Foundation than Colleen West,” notes Dawidziak

Colleen also is a member of the Sayville and Patchogue Chambers of Commerce as well as other civic organizations. Since 2007, she has been a member of the Board of Directors of United Cerebral Palsy (UCP) of Suffolk County, serving as Chair from 2009 through 2017. She was UCP’s Dinner Gala Honoree in October 2009. Colleen was named “Woman of the Year 2009” by Times Beacon Record Newspapers on Long Island. She has served on fundraising committees for the American Heart Association’s Go Red for Women Luncheon, Girls Inc. of Long Island, Victims Information Bureau of Suffolk and Splashes of Hope. She has been featured on Cablevision’s “Women of the New Century” and is a member of the Energeia Partnership — The Academy for Regional Stewardship at Molloy College, a 2-year program from which she graduated in January 2010.

Rollstone is among several organizations to honor Colleen leadership and altruism, which include the National Association of Women Business Owners, Girls Inc. of Long Island and the Long Island Center for Business and Professional Women. Colleen was named one of Long Island’s 50 Most Influential Women by the Long Island Business News two times and in 2014 was inducted into the Hall of Fame. She was also an honoree of the Victims Information Bureau of Suffolk (VIBS), Splashes of Hope and Advancement for Commerce Industry Technology (ACIT). She received an honorary degree in 2009 from the Children’s Center at UCP for her dedication to their education program.

Colleen is a graduate of the Long Island Business Institute and the Dale Carnegie Institute, where she served as a graduate assistant.

She lives with her husband, Steve and celebrating 25 years of marriage this year.  Colleen is the very proud mother of Shannon and Erin and her five beautiful grandchildren.

Stay in the Know with The Rollstone Foundation

Rollstone Foundation is a non-profit 501(c)3 organization with the mission of aiding in the adoption of Special Needs Children worldwide.

Home | About Us | Photo Gallery | Sponsors | News | Events | Contact Us

© 2021 The Rollstone Foundation. All Rights Reserved.
This website is designed and developed by The Public Relations and Marketing Group.